I had a delightful day last Wednesday.  It was delightful not just because it was a perfect, sunny Autumn morning when I ventured out along the canal tow-path on my bicycle: it was delightful because I found charm and eccentricity in a most unexpected place.

I’d set out to go and choose some tiles for my kitchen, which I’m ‘doing up’ over the autumn.  So far, so mundane.   I thought I’d take a look at Tile Trader in the Ryeford Industrial Estate (right off the Ebley Bypass as you’re heading towards Stonehouse, or turn left soon after Ryeford double lock if you’re cycling along the canal tow-path).

I’d pictured a typical unit on an industrial estate, selling tiles, hopefully an independent family-run business rather than a chainstore.  That’s what I found there, but so much more!

The first thing you see when you go through the gates is an anarchic yard full of vintage cars, chickens pecking around, and architectural salvage such as old stone urns, sinks, roof tiles, old blue wavey path edging tiles, staddle stones, pots, garden forks, iron gates, garden canes, garden gnomes and anything and everything.   A weirdly large number of golf clubs too. 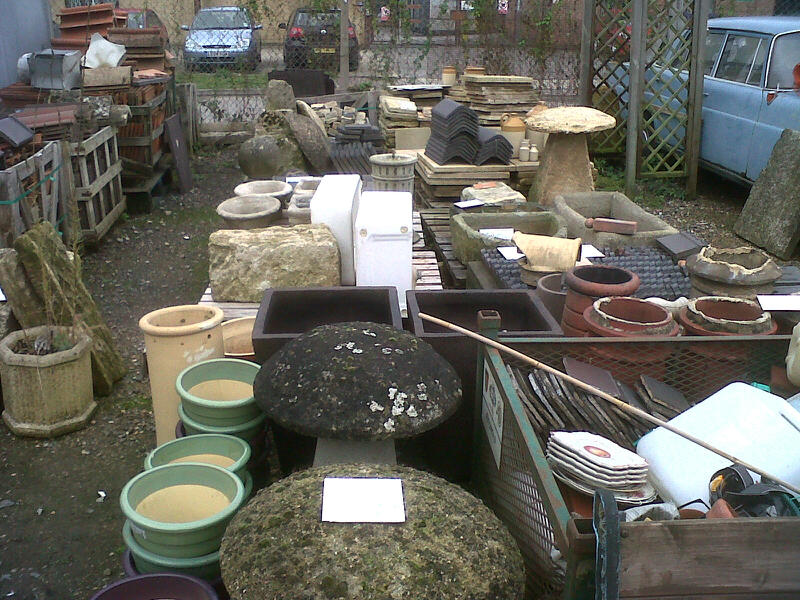 Tile Trader is a normal-looking large tile shop with helpful staff and a great selection of tiles.   But then there’s Dave, the retired owner, who still hangs out there doing the sort of stuff that doesn’t normally go on at a tile shop.  He restores old cars there as a hobby, and trades in a mixture of junk, curios, second hand goods, and architectural antiques and salvage.    If you want a chimney pot or an old iron gate, a settee or an old enamel advertising sign he’s your man.  Loads of stuff that you might occasionally want for a garden, such as old sinks, paving stones, path edging tiles, gnomes, canes, garden forks, and who-knows what.

Dave was friendly, the prices seem reasonable, and the charming experience of coming across a corner of ‘different-ness’ in an unexpected place really made my day.